Which cheek and how many? The origins of the other French kiss 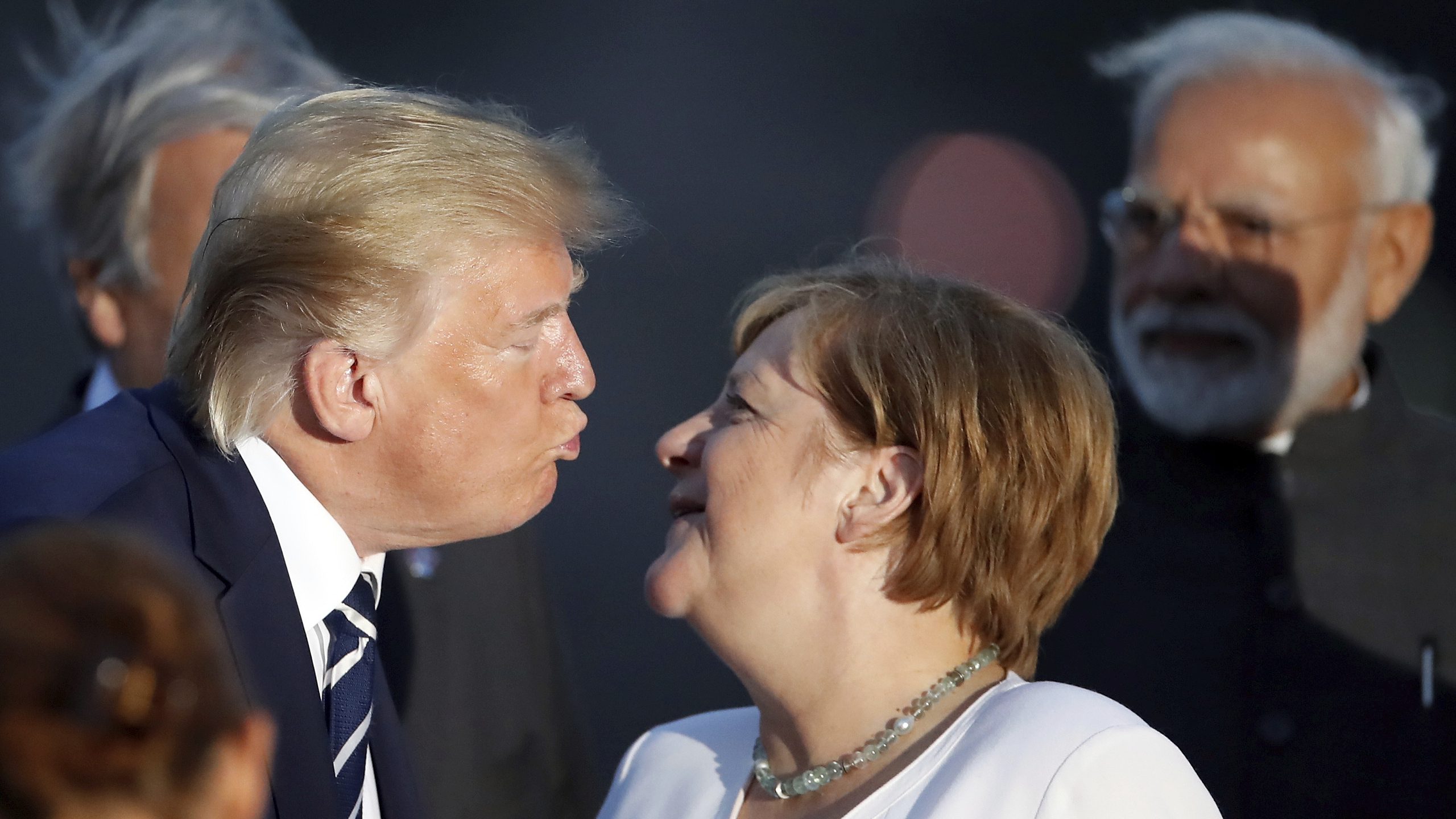 In the English-speaking world, friends and family generally greet each other with a wave, handshake, or hug, depending on their degree of intimacy. In France and other countries, however, the kiss is more common—not on the lips, but a symmetrical brush of the cheeks.

The image is well known in world culture and is a part of everyday life in much of Europe, but the ritual can seem impenetrable to the uninitiated. Would you kiss someone the same way in Marseilles as in Madrid? Which cheek should you present first? And how many kisses?

For my upcoming book, Do You Speak the French Language(s)? I collected information about how French is spoken via an online system. It allowed me to identify the prevalence and range of a number of regional expressions, including the classic “pain au chocolat” versus “chocolatine” debate: In English, one simply says “chocolate croissant,” but the question is trickier in France. There’s also the vexing question of how the French refer to a pencil, not as simple as you’d think.

To better understand the question of how one greets a friend or family member with a kiss in Europe, I decided to map it.

Greeting with a kiss isn’t just a ‘French thing’

First things first, while many Anglo-Saxons believe that kissing as a greeting is unique to France, the practice is common in a wide range of European and Latin countries, as well as Russia and certain Arabic and sub-Saharan nations.

Its origin is unknown, though there are many theories. Is it a ritualized form of ancestral behavior, like sniffing each other for recognition, or is it an emotional one arising from childhood? There’s no consensus among historians, anthropologists, and other experts of human behavior. The ritual appears to date back to antiquity and has known highs and lows throughout modern human history. Sometimes it was encouraged, other times forbidden.

The question becomes even more complex when one tries to understand contextual factors. There’s the event itself (saying hello, goodbye, wishing someone a happy new year, etc.), and then there’s the relationship between the people involved (it was long reserved for family members and those of the same gender). Kissing between men was once stigmatized, yet is common in certain contexts and some Slavic cultures.

For the past 15 years or so, this ritual has been a regular subject of online debate. Some of the discussions are about how many kisses one should give. In France, the question first cropped up in 2003 with the appearance of the website Combiendebises (“Howmanykisses”). The greeting also inspired a popular video from British stand-up comedian Paul Taylor, “La bise.”

To better understand the question, from 2016 to 2019 we conducted a series of online surveys. Our initial map was based on answers from more than 18,600 respondents who said they had spent the bulk of their youth in Belgium, France, or Switzerland.

When asked “How many kisses do you give to greet someone close to you?” the respondents were given the choice of one, two, three, four, five, or more. We tracked the responses for each district in Belgium, France, and Switzerland, retaining the number with the highest percentage of responses. The results are striking and show a number of clear patterns. 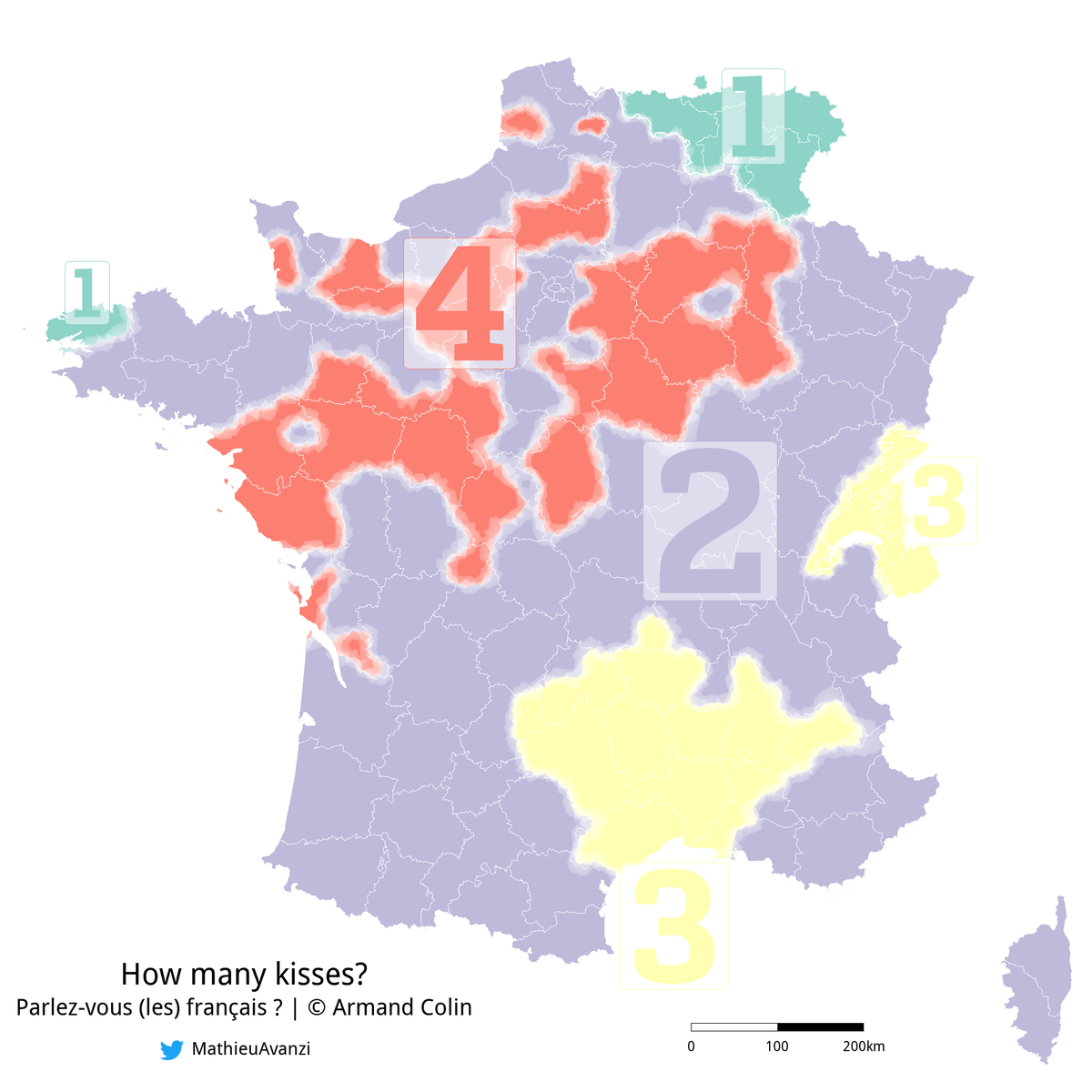 Distribution of the number of greeting kisses in Belgium, France, and Switzerland.

In Belgium, nearly 100% of respondents stated that the correct number of kisses was one. Interestingly, the only part of France where the same holds true is hundreds of kilometers away, in the Brittany’s Finistère region. There the percentage answering one kiss was slightly lower, at around 70%, but still a clear majority.

Elsewhere in France, most residents exchange two kisses when greeting somebody, except for those in the region of Languedoc and the south of the Rhône-Alpes region. Two kisses are also customary in the French-speaking parts of Switzerland. In northern France, the areas in pink correspond to places where people still give four kisses. However, data indicate that in these regions the four-kiss greeting has stiff competition from the two-kiss version.

As can be seen on the maps below, the custom of four kisses is more prevalent among older residents of France, primarily in eastern Brittany and the Loire region. Yet there’s also a hot spot of support among under-25s in the Champagne region.

The reason behind these differences remains unknown. One respondent remarked that the custom of three kisses appeared more prevalent in the area roughly corresponding to 17th-century Protestant France, and that it could have been a way of recognizing those of the same faith (three being a sign of the Trinity). Tradition has it that four kisses are given so that each person can kiss each of the cheeks of the other twice.

The second debate relates to the cheek that should be presented first for a kiss. While 15% of the 11,000 respondents said “both” or stated that they didn’t know, the remaining 85% had clearer ideas, as shown in the map below.

Distribution of which cheek is presented first when kissing in Belgium, France, and Switzerland.

We can see that the territory is broadly divided into two parts. In the southeastern and eastern areas of France, it’s left cheek first. In the rest of the country, it’s the right. There are, however, two islands in each of these broad regions: In the blue zone, the French-speaking part of Switzerland stands out. In the red zone, Haute-Normandie is the exception. Here again, the patterns do not correspond to any known zones that could explain the difference.

What do you call it?

It is a less known fact that the way in which French speakers refer to the action of greeting with a kiss also varies. Our surveys enabled us to map with precision the areas corresponding to the use of seven regional verbs and expressions. 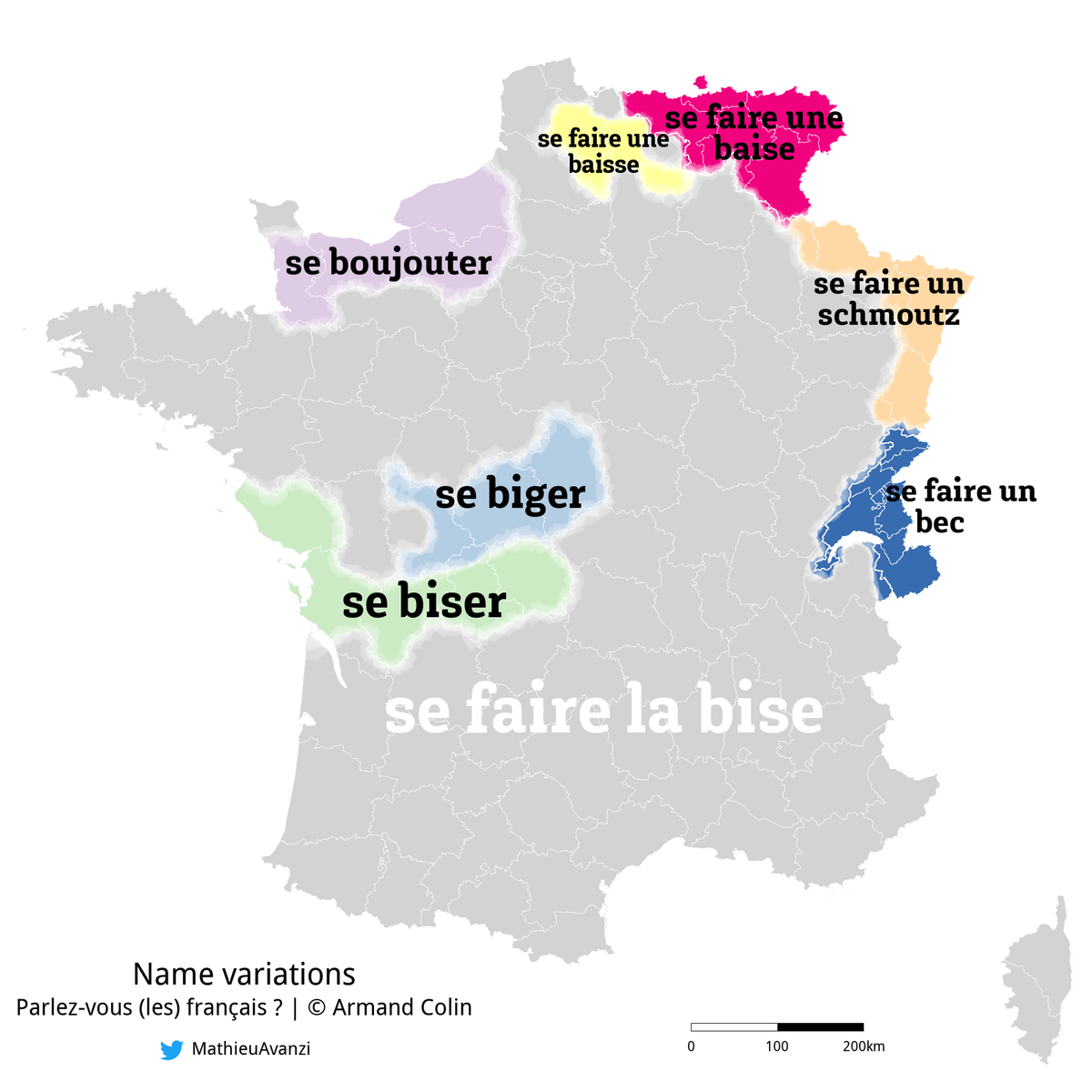 Distribution of expressions for ‘greeting with a kiss’ in Belgium, France, and Switzerland.

Most of the words found on this map belong to the same family as the contemporary French term “bise” (from which “bisou” is derived). While it has fallen out of everyday use, the informal verb “biser” is found in the writing of authors such as Raymond Queneau and still appears in some dictionaries. It is still used in western-central France, alongside the variant “biger,” which likely entered regional French by way of the local dialects (Poitevin, Angevin, or Tourangeau) spoken by our ancestors a century ago.

The word “baise” is a slang term for sex in France but has no such connotation in Belgium, where one gives a “baise” (to someone). In fact, it’s based on the verb “baiser,” to kiss—also found in the old-fashioned word “baisemain,” meaning a kiss on the hand.

The variation “baisse,” found in part of the Picardie region, is also linked to the local form of the word “baiser.” The verb “se boujouter,” typically used in Normandy, comes from the word “boujou,” which is a dialectical form of the French “bonjour” used in the region. (Note that it’s not related to the French word for cheek, “joue.”)

In French-speaking Switzerland, the expression “se faire un bec” is used. It’s derived from the verb “becquer,” still used in French, which originally meant “to take by the beak.” The word “bec” can be linked to its informal French equivalent, “bécot” (which gives us the verb “bécoter,” meaning to kiss or smooch).

In the parts of France where Germanic dialects were spoken at the beginning of the 20th century, the term “schmoutz” is found. It’s of German origin and now means “kiss” in French—and also gave English speakers the word “smack,” as in to smack one’s lips.

Given the richness and variety of European culture and language, it’s unsurprising to find that how one refers to and performs a “simple” greeting can vary so much from region to region. In our great-grandparents’ time—not so long ago, really—regional dialects and languages were what distinguished different communities. Today, this wonderful diversity lives on, both in the physical world and, much to the delight of linguists, also online.

This article is republished from The Conversation under a Creative Commons license. Read the original article.

Disneyland is a work of love. We didn't go into Disneyland just with the idea of making money.
Walt Disney