Review: The Survivors by T.C. Weber 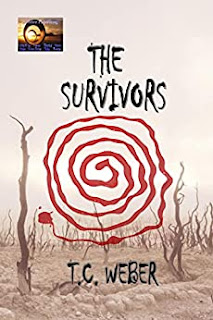 “In a calamitous future, runaway climate change has made the planet nearly uninhabitable. Civilization has collapsed, and every day is a struggle. Lucy, a young mother of two, dreams of a better life by bringing back vanished knowledge. But the rest of her group is focused only on day-to-day survival—at any price. When a deadly hurricane destroys their home, Lucy’s group is forced on the road, where they must cope with hunger, searing temperatures, and vicious rivals. And their nightmare is just beginning…”

The author of several novels, T.C. Weber is an avid traveler (he’s visited all seven continents). By day he works for a non-profit organization as an ecologist. Weber lives with his wife in Maryland.

A post-apocalyptic novel typically assumes a big disaster of some kind, whether something natural, the spread of a massive disease, war, or something else. While this story feels much like some of the post-apocalyptic novels I’ve read, I’m not sure it fits that. A dystopian novel typically imagines the direction some segment of society is trying to get the world to move, assumes a slippery slope worst case, and then shows the imagined results. It’s not pretty. I think it would be fair to call this book dystopian, but it differs in one major way. The world it imagines is not what will happen if government and society change in some fashion, but what is likely to happen if we don’t change. Essentially it imagines the world in the not-so-distant future if we don’t address climate change, figuring out how to stop and even reverse it. It doesn’t paint a pretty picture.

At the heart of the story is Lucy, a young lady and mother of two. She and her kids are now a part of a small group of people who have managed to survive in spite of fires, flooding, lack of food and limited functional infrastructure. Very few humans are still alive and running into another group is problematic as they are just as likely to want to take what Lucy and her group have, leaving them dead, as they are to join forces for the mutual benefit of both groups. (Not that the leader of Lucy’s group is going to want to treat the other group any differently.)

Lucy’s experiences and struggles got me wondering how I would react in this kind of situation and what the right reactions should be. It makes for an intense, thought provoking read, not only wondering how you’d react in the same situation, but also what you can do to reduce the odds of the world reaching the point chronicled in this book.

Review is based on an advance reader copy that hadn’t been fully proofread, so I can’t gauge the final product in this area.

Nobody gets justice. People only get good luck or bad luck.
Orson Welles