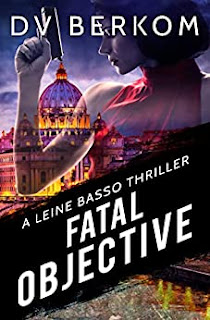 She’s not answering her calls. Or texts. Lou and Santa fear she’s been compromised. According to her contact on the op she’s fine, just busy.

When she finally responds it doesn’t sound like her.

The two men who know her best aren’t buying it. Something isn’t right.

And Lou and Santa are going to find out why.”

USA Today bestselling author DV Berkom is the author of numerous novels in at least three major series and genres ranging from western to modern day thrillers. The one thing her books all have are what she describes as “kick-ass female characters.”

This is the 12th book in the Leine Basso series. It has the obvious things that returning readers would expect. First, the kick-butt female lead, Leine, obviously. The series has her name after all. A few recurring characters make an appearance as well. If you’ve read and liked one or more of the previous books, I’d expect you’ll like this one.

However, if you felt there was a pattern to the old books, like you could guess at a high level what was going to happen with just the specifics changing, the mold got broken for this book. I don’t want to say anything else so as to not accidentally include a spoiler beyond saying that this book is different. I also thought a bit of a bomb got dropped near the end, but if you read to the last word (even beyond “the end”) then you’ll get better perspective on that.

Now I’m eager to get the next book in the series when it come out. Keep’em coming, Ms Berkom.

Although this is book 12 in the series, I think it could be read as a standalone if you haven’t read any of those that came before. There are definitely things from the past that are briefly referenced and you’ll understand Leine and her relationship with the other recurring characters better if you’ve read prior books, but you should still be able to follow and enjoy the story without having done that.

Life is a series of natural and spontaneous changes. Don't resist them - that only creates sorrow. Let reality be reality. Let things flow naturally forward in whatever way they like.
Lao Tzu