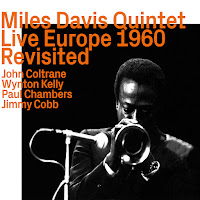 Trumpeter Miles Davis’s great quintet was on the verge of wholesale change as the decade turned. His saxophonist John Coltrane had blossomed into a player of immense power and wisdom after overcoming the scourge of drugs and alcohol, and having the intricacies of composition and improvisation unlocked during a brief tenure with Thelonious Monk. Rounding out the group found here is the classy swinging rhythm section that played on the Kind of Blue record from the previous year: Wynton Kelly on piano, Paul Chambers on bass and Jimmy Cobb on drums. The first three tracks on this album come from the afternoon and evening concerts in Paris on May 21, beginning with the leader’s own composition “So What” along with the standards “On Green Dolphin Street” and “Walkin’.” Miles plays with the exquisite taste that was his hallmark. He did not allow his bands to rehearse, instead wanting them to be fresh on the bandstand, taking risks and allowing the material to be reexamined every night. Many of the tunes are taken at length, 12-15 minutes, and John Coltrane is the centerpiece, looking at the source material from every conceivable angle which it might be improvised upon and then building layer upon layer of relentless music. The scene then shifts to two selections from Stockholm on March 22, “All Blues” and a second version of “So What.” Showing great stamina, Coltrane again spools out solos of great complexity and length, he’s not out of control however, although he may be way out there on performances like “All Blues,” trying out every conceivable method of playing. He’s like a scientist, experimenting and then refining the results and casting aside what doesn’t belong. Although the audiences, particularly at the Paris concert are flummoxed by this approach, Coltrane’s quest was all consuming and genuine and this attitude would continue for the remainder of his all too brief life. This is not to short the other members of the band: Kelly’s hearty and earthly piano playing works to keep the band grounded and Chambers and Cobb are wonderfully locked in. Davis is a maestro, allowing his men to play as they wish, but he is always there for a pithy statement of the melody or solo that is by turns nakedly open or punchy and taught. This is a fascinating release, showing two two of the most important figures in jazz history performing for the last time before departing for vastly different paths. Live Europe 1960 Revisited – ezz-thetics records bandcamp

He that is good for making excuses is seldom good for anything else.
Benjamin Franklin